UTO – what can I say? “The Beast” (Pain Surprises) is one of my tunes of the year thus far. Thus, yes, thus. SWIT is predicting big things for this French combo. I have just returned from Spain, having had a wonderful time down by the sea in Tarifa. Cut a long story short I had limited data so ended up listening to a lot of the usual eighties/nineties music played in the bars and so on and it’s such a genuine delight to get home and hear the music we love again, music by bands like UTO. They did an interview for us while back so here it is (at last!!) and frankly Mr. Shankly it’s excellent !

Hi  Émile & Neysa May, how did UTO form and how long have you been UTO?

– N– UTO didn’t come about straight after Emile and I met. At that time, I was busy getting through my Lit studies at University, and Emile was already active playing in bands and experimenting with electronic music. So UTO only began about 18 months ago when we started living together out in the Paris suburbs, in Ivry-Sur-Seine. We live in a long open-space gallery with sliding glass doors along one side which open onto a garden. The space is arranged to suit our two universes: behind the area where I worked on my words and images, Emile would be composing and arranging music in his studio. He was always just a few metres away, working on a loop, how could I not join in?

Now, there was also an underlying third observer in the flat, an animal with whom we spent a lot of time. His name was UTO and it became ours.

We are cracked on the The Beast, it’s really unusual, it makes me smile a lot – tell me how the production came together?

– N – ‘The origin of the The Beast is rather different to what I described above. It was written before our first encounter when I was at the end of a sad relationship, and the odd feeling of freedom and solitude could only bring one sound out of me, barking. Barking is such a strange thing; it can be so ambiguous. This sound – this action – led to a song that evokes a sense of animality, domination, submission, the masochistic pleasures of submission, regression, and joy.

-E – It’s the first track we did. Neysa had a text and a melody that she wanted me to try to do something with. It came together so fast. I understand that ‘The Beast ‘ is sunny and amusing, and it makes me smile because this song was originally very dark and melancholic, but I felt a dynamism that made me want to go in a certain direction.

What was the first piece of music that affected you, and why?

– E– For my part, I started playing music as a child, and I grew up listening mostly to Jazz, and my brother was a real guide during adolescence. But in 2010, I truly had an epiphany listening to Radiohead and Grizzly Bear.  Everything changed for me, it was the music I wanted to listen to and to make. I heard a melodic richness and an exploration of sounds that were really new to my ears, and the work on the arrangements opened up new horizons. I started working on my own first tracks at that time, and I joined a pop band.

– N- During childhood, music was a necessary soundtrack for me to build up stories; if I played with toys, if I read a book, if I wanted to play at dressing up, the first action which accompanied all the others was putting a CD in the player. My father would always come back from the media library with a couple of CDs that I would borrow. I guess I was 10 when he came back with Nick Drake’s ‘Five leaves left ‘. The CD cover intrigued me first of all, because it reminded me of a picture of my Dad with the same haircut in the 70s, and I felt something English in me, but something I was in part missing. I still miss that part, this is why I sing. The cover has Nick Drake framed in green, looking out of a window onto a garden with the soft light surrounding him. My Dad told me that he died because he wasn’t happy, and that he was only known now because of a car advertisement. I listened to the tracks, and became intrigued by the people he was talking about, the mystical Betty, the Riverman, the Man in a Shed, Mary Jane and her thoughts, Fruit Tree… What that experience did to me, meant that I was no longer able to listen to music as a soundtrack to doing something else. I had to focus on being an active witness, a kind of deep vessel for songs, like secrets, impregnating, permeating me. Rickie Lee Jones and her Pirates album was the second call…

Is there an EP or LP or the horizon?

2 EPs will be released over the next six months – and then an album soon after.

How difficult/easy do you find it to write songs? What’s the dynamic like between you?

– E – The dynamic is never the same, that’s why it’s hard. Trying to have a special way of composing – which assumes following a method or being involved in a ritual – is very desirable, but it isn’t us. So writing songs and composing music always takes a different path, it follows our moods and our irregularities. Every song imposes its own dynamic. Sometimes the lyrics comes first, sometimes it’s the melody, sometimes both together; sometimes the lyrics are written on a loop, sometimes on another kind of musical structure. Generally, when things go fast and easy, the best tracks are laid down. 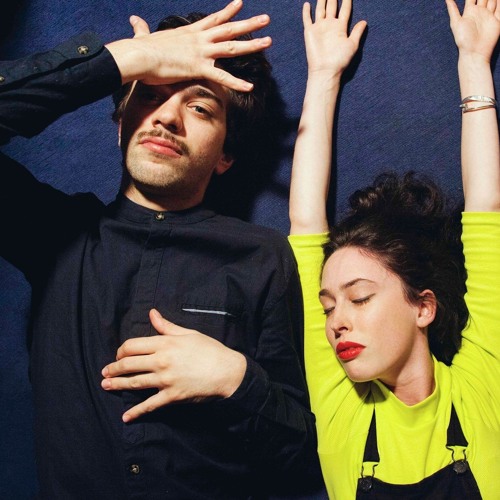 – E – I’m not a lyric writer so I would say Windowlicker  by Aphex Twin, a song which perfectly mingles electronic Glitch music and Pop music with a touch of humour that’s poking fun at the music industry and the crudeness of rap.

-N – I wish I had written ‘It’s Alright Ma (I’m Only Bleeding)’ – not sure this needs any explanation… This song is a masterpiece of literature and a life guide. Dylan managed to achieve his objective: the synthesis of the profundity of life’s imbalance, just in a sentence, with images, which are both simple and immense. What’s intense is that there is also a kind of active resignation acknowledging life’s contrasts (and the nonsense resulting of it) between darkness and noon, between death and childhood, between the grotesque and beautiful. However, this resignation isn’t an invitation to passivity and powerlessness. Every verse is like a wave that crashes in on you, that crashes in on the entire world. What each refrain also offers is the possibility of a breaststroke, of a stoic prayer to reassure the Ma of the song. To me, it’s still a Protest Song. Life is a sea, Dylan tells us, and you can swim until you drown.

Who have been your biggest influences?

– E- I think our music lies in the English 9Os between Britpop and trip-hop.  On Neysa’s advice when we met, I started listening to Broadcast. More generally, I am fond of Warp’s catalogue, with all the diversity that they propose.

– N –  The singers who whisper to me inside my head would surely be Hope Sandoval and Victoria Legrand.  I did however have a recent crush on the Norwegian Jenny Hval and I really hope her voice will also be stored in my mind soon. These are the voices in my conscious Pantheon. Elsewhere, in the blur, in the heart, I should also mention and pay homage to Nick Drake, Rickie Lee Jones, Karen Dalton, Broadcast, Atlas Sound, Blonde Redhead, the Tindersticks, Here we go Magic, Portishead and the Goddess Beth Gibbons, even though I can’t relate them directly to my music. Although I also need to listen to new tracks, discover new bands like Just Before Dawn  by Sonnymoon , Drunk and with dreams by Angel Olsen : magnifique!) at the end of the day, like a dog, I always go back to my inner voices.

What’s exciting you on the French music scene these days?

-E – Actually, we don’t know the French music scene very well, we have just arrived ourselves! Jacques who is one of the artists at Pain-Surprises Records is a really great guy. I love his approach to the live scene; he has this ability to always improvise which is something new and interesting today. More recently we saw a performance mixing literature and polyphonic pop songs by the band Catastrophe at La Maison de la Poésie, and this was really totally different. The rotation between the texts which are read out loud and the pop songs works perfectly; like breathing! So we were glad when a week after that Neysa recorded some backing vocals for Catastrophe’s chorus!

I love the record sleeve by Nelly Maurel, whose idea was it? 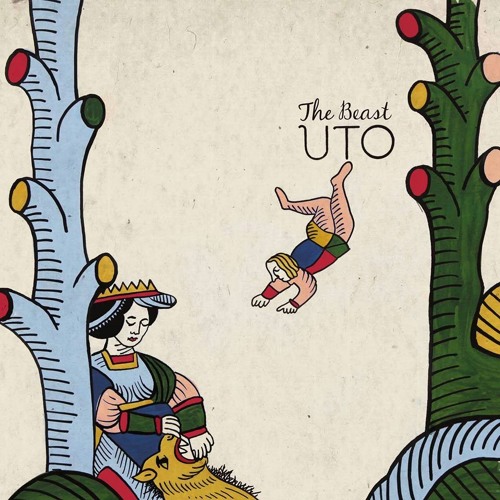 -E –  Neysa was into reading Tarot cards when we met, with very mixed results!  Our dear friend Nelly Maurel – who is an artist in everything she touches – had the idea of isolating details from the Tarot Of Marseilles cards, and of redrawing them in opposition to newer, more everyday elements. But this is much clearer in the two covers to come than the one for The Beast. For The Beast, of course, we immediately thought about the Tarot card 11, Strength, with the old lady fondling the head of a beast. Nelly blackened her hair and made her younger, looking more like Neysa, surrounded by the two trees of card 12, The Hanged Man.

Nelly had this great idea of creating a tension with another character from the Tarot, the falling man of The Tower, card 16.  If you want more of an explanation, you will have to consult your books on esoteric symbols! 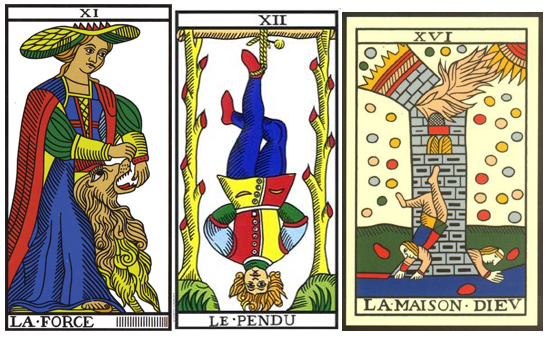 -E- Success in music is most often measured commercially. Today it means to sell your music and to fill concert halls. But the outcome of a project and its continued existence interests me more than that type of success. My idea of success would be to say something about our epoch in a timeless way.

If you weren’t musicians what would you love to do?

-E- A forest ranger or an Alpine hunter. A Private Investigator or a boat builder. Take a trip around the world, or learn how to paint like a child.

-N- I could say working in an artistic complex, on the radio, in education, teaching, working in a garden, in an orchard, building wooden houses, working in the theatre, working in a museum specialized in digital arts, being a screenwriter, a scriptwriter and also a detective, an International Talent Scout…..

What question would you like to be asked that you never are? And what would be your answer?

-UTO- What would you like for your birthday? A Prophet 5 and a house by the sea.

UTO have done a rather wonderful cut-up portrait for us which we will be adding to our gallery next week, check back then 🙂