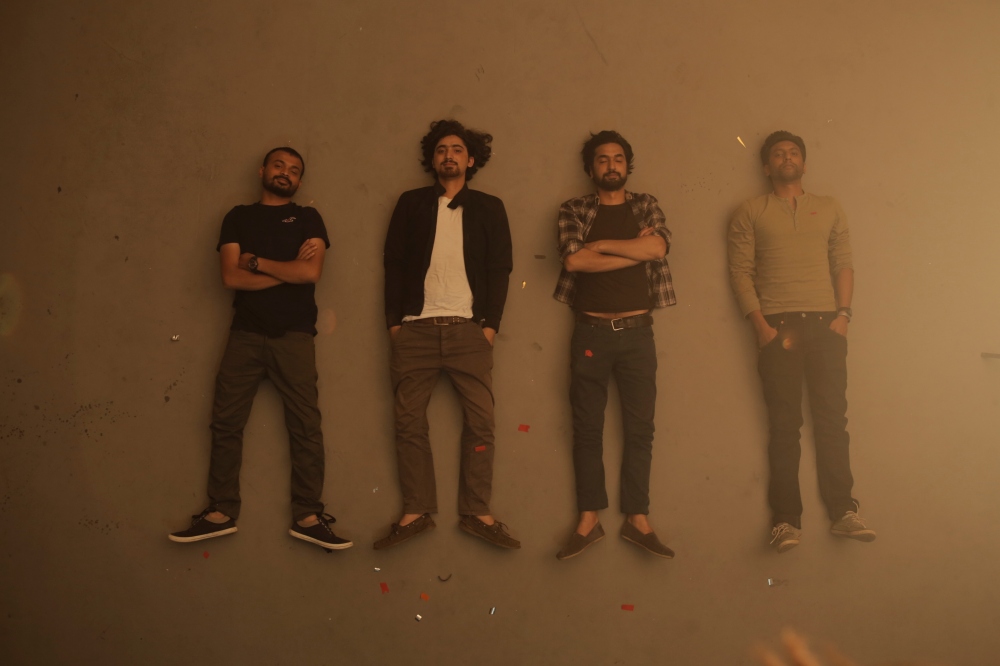 Parvaaz are a Bangalore-based rock band comprised of Khalid Ahamed (vocals), Mir Kashif Iqbal (guitar), Fidel D’souza (bass) and Sachin Banandur (drums). The band was formed in early 2010 and released their debut LP, “Baran” in 2014. In recent months have released three excellent new singles. Their music is distinctive, contemplative, tuneful, alt-rock with and an underlying seam of more traditional Indian sounds and we love it. We were delighted when Khalid agreed to answer some questions for us.

Our music journey began in 2010, in Bangalore, when my childhood friend Kashif Iqbal and I reconnected, after several years and discovered that we both were interested in exploring and making music; which led to us jamming together and so we began.

One of the first pieces of music which stuck with me was of a rock fusion band, Junoon. At that point of time, the access to internet was minimal and most of the popular music which we got to hear was either from television channels or audio cassettes. A lot of the times, we would hear pieces of pop music or artists who we didn’t know much about, but liked the music piece. One of the bands which was popular around that time and stuck with me was Junoon. Their work sounded different musically, to other contemporary songs; and as a young listener, their tunes sounded fascinating and shall we say ‘cool’, compared to the more traditional music of Bollywood.

Although, it is kind of unfair to be asked to pick favourite, as all songs have their story and journey and cannot be really compared. But if I must, I think it would be Colour White, which has been written by Kaashif and me. The conception and the evolution of the song had a certain flow to it, which came very naturally to us. It was also a breakthrough song, as we composed it long after having released our other songs and was soon after being performed.

What kind of themes inform your music?

I dont think I can point out a particular theme which informs our music. We don’t define our music by a genre or a theme and so our inspirations are also not thematic. Our music has been more about the collaboration of our own ideas and interpretations, and musical themes don’t mean much to us when we are making our music.

We love Shaad – can you tell us what it’s about and what is the story of the video?

The song speaks about loss. Loss which can be interpreted as loss of a valuable person or loss of value in companionship but moving on despite the loss, without any regret.

Pink Floyd has been one of my biggest inspirations. I am particularly taken by not only the kind of music he made, but also how vast his discography was and how he grew as an artist through music and how his music grew over period.

There are so many of such pieces but if I had to name one, it would be 39th Gülay by Daffer Yousef. I particularly love the beauty in the collaboration of the song, where every instrument blends beautifully together to create a moving piece of music. The interplay between the different artists and their instruments is commendable.

Blue Ridge Mountains by Fleet Foxes: The vocal melody of the song and the guitar at the beginning, takes me to a soothing place, which also is a reminder of home for me and how it feels to be home.

Do you think bands from India get enough exposure abroad?

International exposure is something that is yet to be in the reach of most of the independent artists, and is rare to come by, unless you really push and look out for it. It is certainly something that Indian bands could have more of.

What or who is exciting you on the Indian (or Bangalore) music scene?

There are a lot of upcoming artists who are making some really good music. A few personal favourites in terms of good music are Warren Mendonsa from Blackstratblues, Thermal and a Quarter. One of the bands that I really admire and am fascinated by is Indian Ocean, for their musical journey and how they have stood the test of time and continue creating music which stands true to themselves.

It is a good platform for artists to channel their music through in today’s time. It can highly increase the chances of building audience internationally and also in having an artist’s work available at one place, making it easier to access. And avenues like Spotify and Deezer, being international platform, are a superb platform to be on.

My idea of success is to be satisfied with my work at the end of the day, knowing that I created the best I can and made something that resonates with me. And to be able to create as much music as I can create, till I can.

I have no unasked questions in life. I have said it all and nothing to say.