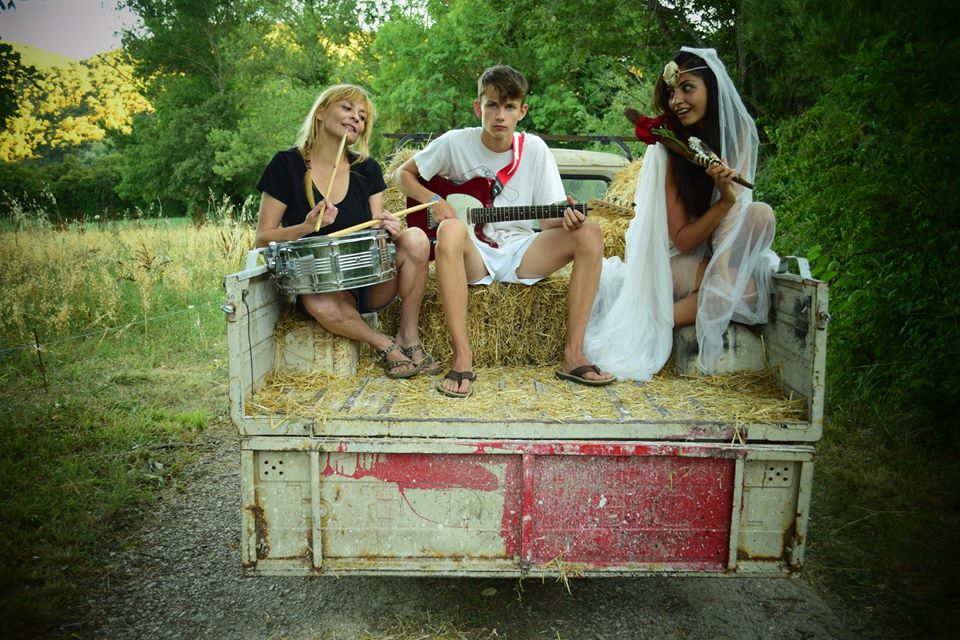 They mean it man…yes, we’ve featured the wonderful raucous Sale Gosse on a couple of occasions here on the SWIT –
they totally rock and we love them so much, more than is healthy probably. They got it all – fuck you drums, fuck me bass, fuck everything guitar, tunes and atitude, bad atitude – so bad it’s good. So good it’s bad. And they’ve got something most bands don’t -yes that have a ferret. No wonder they kick ass. They answered some questions for us and it made us laugh, a lot. It made us put on sun glasses and drink rum. It made us talk like pirates. Their new EP “The First Dick I Ever Saw Was Iggy Pop’s” is out (on Luik Records), just like his dick was and it’s fucking gorgeous – the EP I mean, not the dick. Can’t speak about that. Check it out y’all.

Agathe’s journey began in 1990 as a singer in Les Spheres, a grunge girl band in Metz, France. Randa’s in a couple of post-no-wave all-girl outfits in Brussels, and Nino’s somewhere in 2010, with his first guitar lessons.

Tell us a bit about the band, how long have you been together? Who writes the songs?

The band formed when Agathe and Randa met at a gig in January 2015. She was raving about how talented of a guitarist her son Nino was and, shortly after, we just jammed together. We clicked instantly, despite the 15-year age gap between each of us. “Sale Gosse” means “brat” in French, and was a bit of a no-brainer. The three of us compose the songs together and Randa usually comes up with lyrics based on our endless chats about guys, girls, failed relationships, or chilli con carne.

Agathe: Porque Te Vas by Jeanette. I’d listen to it on my slot-in record player, a cult relic from the past!

Randa: All That She Wants by Ace of Base. That beat was, and still is, plain sick!

Nino: Boys Don’t Cry by The Cure. It just packs a punch.

Nino: Strangle, because it shows that Sale Gosse can also have a powerful and badass edge.

Agathe: DIA! This song is just a kick in the face and represents the three of us quite well. Thank god Randa wrote cool lyrics because I initially just yelled “fuck you” all the time.

Randa: Whoa, this question is a bit like asking who is your favourite child… But I’d also have to go with DIA. It was initially about a former flame, but I like the way it resonates on a whole other level. And “do it anyway” has definitely become our credo.

We love the new EP, are you happy with the results?

Yes, we really are! And proud. It still feels weird to us.

How important is Iggy to you? Was it really the first dick you ever saw?

Agathe: Iggy and I go a long way… It’s not really the first dick I ever saw per se, but I was so shy at the time that I never dared to have a proper look at those strange things. My uncle took me to an Iggy Pop concert when I was 17, and when I saw his on stage I just went “Waaaah, it’s beautiful! And Alive!!” haha.

Nino: Rock Bottom by King Krule. I can’t believe he composed something like that so young.

Agathe: Lost In The Supermarket by The Clash. It represents me quite well.

Where did you get the ferret?

Gosh you’re really into that ferret, aren’t you! His name is Fury and he rocks! He belongs to a friend of Nino’s and she just rocked up with it on the day of the shoot.

Randa: Yeah, ditto. If I had to break it down I’d say Sonic Youth music-wise and PJ Harvey vocals-wise. And a bit of Boss Hog too for sure.

Agathe: Well since I’m the oldest I’d have to go with The Stooges, The Clash, Wire, Nirvana, Pixies, Nina Hagen, PJ Harvey, The Cramps, Sonic Youth, Serge Gainsbourg, King Khan, and many more.

Nino: Fuck You by Cee-Lo Green. It makes me happy the minute I play it.

Randa: All Things Come To Pass by The Babies. It’s so simple and cool. And the line “One day you were born and one day you’ll be dead” is just plain genius!

What or who is exciting you on the Belgian music scene?

Agathe: It It Anita, they’re Liège-based noise rockers and the founders of our beloved label Luik Records!

Randa: Cocaine Piss, glittershitstorm from Liège. Best. Live. Band. EVER!!! And I’ve got the biggest girl crush on singer Aurelie. She rocks.

Playing gigs, meeting cool people, getting to know our audience, seeing our family grow, and getting as much fun out of it as we can. Oh and touring Japan.

“When are you available for a world tour?”

– During the summer holidays.