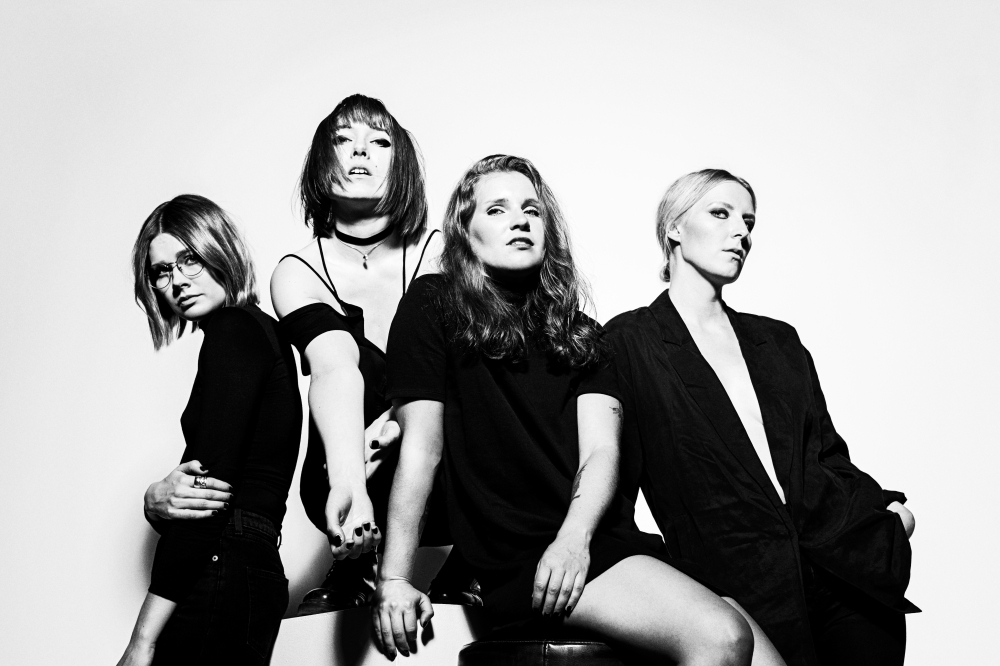 Hailing from Helsinki, Finland, The Wrecking Queens are – Nöpsy (lead vocals and keyboards), Jenni (guitar and vocals), Maria (bass guitar and vocals) and Katja (drums and vocals). They’ve been releasing music since 2011 and we featured their wonderful new EP “A Different Kinds Of High” not so long ago.

“The new EP A Different Kind of High is the result of our years spent together making music. It makes the listener drift into a real life dream, where you move from the embrace of love, bitter sweet tears and sun kissed fields to streets lit by neon lights.

We couldn’t agree more and we were delighted when the girls agreed to answer some questions for us.

Why did you decide to be in a band?

We all probably had a dream that someday we would be in a band. When we found each other from high school the dream came true as we started to play together. Music has always been a very important part of our lives. – Jenni

For me it was Michael Jackson´s album Dangerous. It was the first “real” cassette I got from my parents. There was something magical about it at that time. And it still does. – Katja

Well all of the songs in our new EP are super good, of course. Pigeons is an important song because it was the first song where our new sound really found it’s place. But then songs like Golden and Beverly are perfect for dancing. It’s hard to pick just one. – Jenni

How do you know when a song you’ve working on is complete?

Well, we don’t always know. Sometimes it’s very easy to tell when we’ve reached that point where the song is complete and everyone is happy about it. But not every time. It can also need a longer break from focusing on the song and after that it’s easier to see and hear where the song is heading and what it might need more/less. – Jenni

We all love Fleetwood Mac so maybe some of their songs. They all are so good it’s hard to choose. We just made a cover version of Everywhere so maybe that. Or Dreams. And then there’s Prince and other classics, could be also one of their songs. – Jenni

It’s hard to just pick one. We’ve got a long list of different artists and bands that we have listened and who have probably influenced in our music in a way or another. Just to mention couple: Prince, Fleetwood Mac, The Xx, Daft Punk, Grimes, Tame Impala, Beach House, New Order, Beck and Glass Candy. – Jenni and Katja

One of my all-time favourite happy songs is Journey´s Don´t Stop Believing. I just have to sing along like crazy every time I hear it. Maybe because it´s so genuine and powerful. – Katja

It´s hard to say what is the best, but the band called The Holy (also from Finland) is something I´ve been listening to this year. – Katja.
I would say that at the moment one of the most interesting new band is a space kraut duo The Black Metal Raccoons (also from Finland). –Malla

Do you think bands from Finland get enough exposure in the British/US press? Is it important to you?

Of course it’s important to us, but there are so many great bands in the UK (and all over the Europe) as well so it is quite hard to get much exposure in the US press as a foreign band, I think. But not impossible. Maybe you just have to have a good manager or promotion agency which has wide network and are eager to do their job. – Malla

They are important channels for spreading new music to all over the world, but of course users have to find the music and artists first. I think the playlists are quite a handy way to find new music and good promotion for the new artists as well. For bands like us, who distribute their music themselves, online streaming is the best way to publish music. – Jenni and Katja

First of all you have to trust and believe your music and what you do.