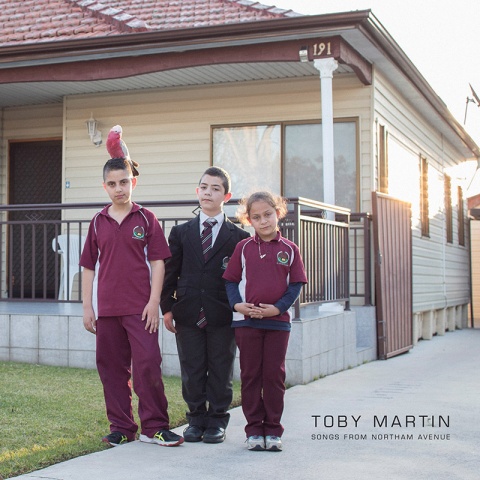 Toby’s rather splendid new album “Songs from Northam Avenue” was just released today (17022107). We posted his fine single “Spring Feeling” back in November and he featured in our best of 2016, the record certainly lives up to promise of that song.

He said of the new LP “I wrote these songs in people’s front yards and nature strips in the Sydney suburb of Bankstown, an idea dreamt up by Urban Theatre Projects. I came to Bankstown as a bit of an outsider. My Dad and his family lived there for a few years when they first moved to Australia from Europe in 1948, but I never had. The people who hosted my songwriting residencies were amazing – David Cranston and his old weatherboard house on Northam Avenue and Michael Klammendine and his mixed business and coffee shop on the corner or Chapel rd and Dellwood st. I had a fantastic time, and I kept coming back. I fell in love with the neighbourhood.
The conversations I had with David and Michael, and their families, friends and neighbours, wormed their way into the songs I was writing. We talked a lot about family, about being fathers, about our children. This started to become a theme: parents worrying about their children, their children’s desire for escape. Other things sparked songs – olive trees in front-yards, a van driving past, comments from passers-by…
To play the songs live, and to record them, I asked some local musicians to collaborate with me. Bankstown is a really diverse place – 55% of people speak a language other than English at home, especially Vietnamese and Arabic. I met Alex Hadchiti who played Oud and keyboard, and through him I met Mohammed Lelo who played Qanun, both well-known Arabic/Middle-Eastern instruments. I also met Dang Lan who played Vietnamese music – the Đàn bầu, Đàn tranh and percussion on small tea cups. There were some other special guests along the way, such as Maroun Azar who played Mijwiz, and guest singers Holly Throsby and Sarah Blasko. The record was produced with Bree Van Reyk.”

Toby has a PhD in the history of Australian music from the University of Sydney and is a former member of Youth Group, releasing his first solo album, “Love’s Shadow” in 2012. His PhD thesis, published in 2012, is titled “Yodelling boundary riders : country music in Australia, 1936–2010”. We were delighted when he agreed to answer some questions for SWIT.

Do you think there’s an “Australian sound”? Something(s) that distinguish it – be it landscape, colonisation, climate etc. that has an influence?

The million dollar question! Well, I think the old cliché about Australian music being spacious because there is heaps of space here is pretty spurious. Most Australians live in cities, and while there is spacious music, there is also small, claustrophobic music. I think those stereotypes come from what people look for when they write about music. But I think scenes certainly develop in Australia. And because of its distance from the rest of the world (apart from New Zealand) maybe those scenes are quiet distinct. But also I think sometimes it’s more specific than an ‘Australian’ sound. I think there is a strong ‘Melbourne’ sound (Dick Diver, Twerps etc.), and I think there has often been a ‘Sydney’ sound (Half A Cow bands in the 90s for instance) and there has been periods of a ‘Brisbane’ sound (Custard etc. in the 90s). So yeah, it’s often more localised than national.

Why did you move back to Australia after Youth Group broke up?

The move to the States was only ever temporary and we moved for Youth Group. And my working visa expired and that was that.

How did the video for Spring Feeling some about?

We filmed the video at the house in Sydney where I wrote most of these new songs. I did a ‘residency’ there – sat in the front yard and wrote songs and had cups of tea with David who lived there. So we filmed it in his back yard. The musicians who play on the album come from a diverse range of backgrounds – Vietnamese, Iraqi, and Lebanese – and they are in the video. And also the kid’s choir who sing on the song are in the clip too.

It’s really joyous song, do you Do you consider yourself an optimist?

No. It doesn’t come naturally. But I think it’s important to be optimistic, and I try hard to think positively. I think at this political moment that’s more important than ever. It’s easy to sink into bitter negativity. Much harder to look forward with hope. But very important to do.

When can we expect the new album? Would you say Spring Feeling is representative?

Spring Feeling is certainly the happiest and most straightforward song on the album. The other songs are longer, more story-based and some of the stories are quite sad. About death and families and gardens. They are all based on stories from the Sydney suburb of Bankstown where I wrote them. This part of Sydney is very diverse, and the band that played on the album is from the area and reflects that diversity. Mohammed (from Iraq) plays Qanun, Lan (from Vietnam) plays zither and monochord, Alex (from Lebanon) plays oud. And then the core of the songs are western, folk-pop. So it’s an interesting mix.

I see there was a Youth Group reunion recently – will there be new music at any stage?

Yes, we are planning on making a new album this year.

You did your thesis on Australian country music – why did you chose that subject?

I love the music. But also it’s a fascinating area of research to me. It was rock ‘n’ roll before rock ‘n’ roll. It was the hip youth culture of the 1930s/40s. And I think it tells us a lot about history and culture in general.

Can you recommend some songs/artists that might give us a flavour?

Personal favourite: The Sheik of Scrubby Creek by Chad Morgan. But also Tex Morton, The Schneider Sisters, Shirley Thoms, Slim Dusty. But there’s also an incredible body of work by Aboriginal songwriters and singers. And I would direct your readers to ‘Streets Of Old Tamworth’ by Roger Knox and ‘Stranger in my Country’ by Vic Simms.

What were your conclusions?

That country music is indicative of modernity because it seeks to reject it.

Does the fact that you teach songwriting put unreasonable expectations of your own songwriting? Have your students critiqued your work?

Oh no, I’m not too concerned about that.  I’m just a dead beat Dad in that respect: do as I say, not as I do. And God no! They would give me a D.

Buddy Holly, ‘Everyday’. From my parent’s record collection. I just remember running around the lounge room with a stick as a pretend microphone. I guess I loved the energy. That and the lyric was about a Rollercoaster.

Correctional Complex. (It’s on the new album) Because there is not a wasted lyric or a bad line. (Usually there’s at least one line I’m not happy with!) Also because I managed to fuse personal experience with imagination in a satisfying way. And because it’s depressing subject matter, but the song itself is not (I hope).

‘Dive For Your Memory’ – The Go-Betweens. An exquisite combination of wryness and poignancy. I am envious of the light touch Robert Forster and Grant McLennan brought to writing about sad subject matter, and try to emulate that.

What artist(s) has been your biggest influence?

Emotion scoops the footpath’s velvet edges,
estate agents’ bluster calibrates the street’s
livability, treeless, ajar with fridges
bunked out. Investors wave sheets
of sums to air, a tiny computer chalked
on glass, loving the artist’s marble noose
in adjacent pop-up gallery they might’ve forked
out for, but didn’t. It was no use
crying now though her vale of tears candies
a conquest, with stuck name tag and good insurance
that barely cost a sou. A countdown into space
echoes, blue lorikeets flit the race
and pigeons chew the eaves for reassurance
over suckling locals and tourist dandies.

Never Loved A Man by Aretha Franklin. Because it just sounds so incredibly good.

What music would you have played at your funeral?