“If you don’t know where you are going any road can take you there”
― Lewis Carroll, Alice in Wonderland

We have been keeping an eye on Wunderland for some time now and we featured their wonderful single, “NUE” , a few weeks back. The band is Alice Schneider, O de Mars, Stéphane Commecy, Simon Léger and Philippe Chauvin. We caught up with lead singer Alice  to find out more about the band and got a rather handsome drawing from Philippe also. Wunderland host the FESTIVAL PARIS VIENNE at the end of September, see the poster/link below for more details.

Tell me a bit about the history of Wunderland.

Wunderland was created about 4 years ago when I played in Paris for the first time and decided to stay there. At this time I played with Austrian musicians and we were in need of a bass player. After the concert I was talking to the sound engineer who liked our music and by purpose he is a bass player.. His name is Simon Léger. This was the first Wunderland “step” and Simon is still there playing bass for Wunderland and I am very grateful for his fidelity, this means a lot to me! After a while he presented me the great composer O de Mars and the super talented drummer Stéphane Commecy …that´s how the actual Wunderland formation was founded …Wunderland.

You are originally from Vienna – how long have you lived in Paris and what drew you there?

I live in Paris for 8 years now and I came here because of the sound of the French language that sounds so nice for my German ears …I always wanted to live in “French” and I was since ever a big fan of French art and culture.

You are a musician and an actor, where does your heart lie?

This is such a difficult question… when I made my theatre studies I never imagined that I would sing one day, although I really love to work with my voice. After having got many voice over jobs I got more and more confident and one day I started to write a text for one song and I sang. I immediately felt in love in singing…

I really do love acting also and to fulfil a role is a big pleasure for me. The difference is maybe that in Wunderland I am my own director and author which is a big challenge and when I play theatre I work together with a director and an author which is another big challenge that I don´t want to miss.
I really love both and both influences and helps the other I think. 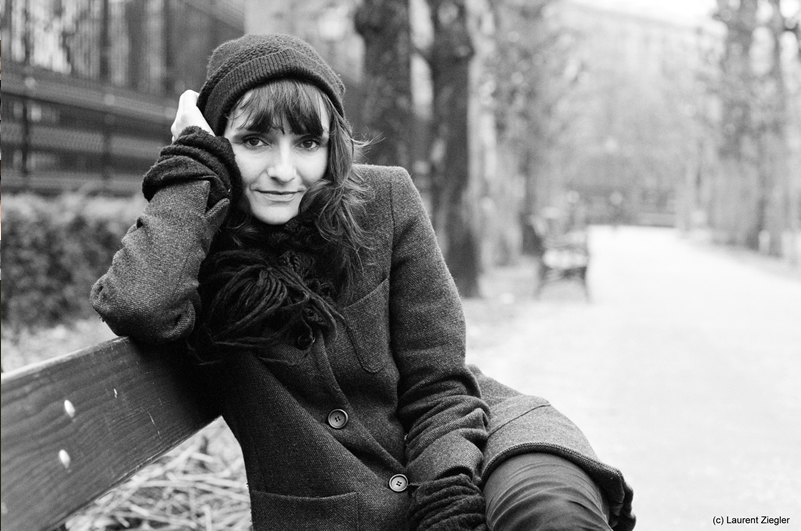 Do you feel there are both Austrian and French influences in your music?

Yes of course! As I grew up in Austria most of my influence comes from there even though I listened not only to Austrian music (at the time there were not so many bands as today) and the Wunderland musicians are French so they put a French touch… it is inevitable.

In relation to writing, is that a group effort? How do you agree on direction?

It really depends on the song, we don´t have one way to do songs, O de Mars is the composer and sometimes I write the lyrics to his compositions and sometimes he composes music for one of my texts O de Mars always says:  Il n´y a pas de règle!

The excellent video for your latest single, NUE, feature a pretty intense performance from you, how did it feel to make the clip?

I loved doing it, if I had the choice I would do it more often (besides having a concert every day too hehe)…it was a very intensive collaboration with Philippe Chauvin who filmed everything, projected all the stuff and filmed it again with me. We spent a long time on it (several months) because we made many tries and we wanted to make it in the best way.

Live or in the recording studio, where do you feel more comfortable?

Again I can´t answer, I really love both – both have different issues that represent a great challenge for me.

What was the first song you loved or your earliest musical memory?

I always listened the music of my oldest brother Alexander. Fortunately he has a great taste for music…if not maybe Wunderland would sound very differently hehe… I was and still am very impressed by Falco an Austrian singer and musician from the eighties… you may know the song Der Komissar or Amadeus? I also remember David Bowie and Pink Floyd coming out very loudly from my brother’s room…

What is your favourite song/piece of music that you’ve written and why?

Difficult question…. every time you write a song you fall in love with it …and I love each of them for another reason… the song the public likes the most on stage is “Fallen” I think and when they just listen to us they like the most “Nue”.

What artists have been your biggest influence and in what way?

Again David Bowie for his enormous creativity, Pink Floyd for their sounds, Massive attack for their sensuality, their beats, The Cure for their rhythm, Portishead for their fragility, Björk for her energy, Siouxsie and the Banshees for their special style, Kraftwerk for their German being.

Many many …Space Oddity by David Bowie? I am so impressed that David Bowie was able to make cinema by this song, every time I listen to it I see Major Tom in his space shuttle I feel his loneliness that touches me enormously… but there are many other songs that I would have loved written .. Funny question.

Not many bands include a sculptor (Philippe Chauvin) – how did that come about?

This collaboration is a kind of a dream collaboration because it was so “easy going” and pure … I was in a bar, I talked to a man about our next gig, I gave him a flyer afterwards he really came to the concert and the concert after this concert we played in between the sculptures he constructed especially for Wunderland. This man is Philippe Chauvin and a very talented artist. Since then you don´t want to miss his sculptures at the concerts, they really fit so well to our music and contribute to our very special atmosphere on stage. When you come to a Wunderland concert you don´t only hear Wunderland you can also see it 🙂

Happy…? Hmmm…there are different kinds of happiness…there can be sad songs but they make me happy because of their beauty for example… but I think that´s not what you want to hear….there was one hit in Austria that made me always wanting to dance it is called Hide U by Kosheen.

Do you consider yourself an optimist? How do you feel about the future?

I am a very optimistic person, that´s maybe the reason why I also can be very sad…I think if you are not optimistic you can´t feel anything ….but that´s maybe not true it is just not imaginable for me. I live from one thought of hope to another. Concerning the future of the band I dream to find a manager, this would fulfil my whole being.

Sobre Sordos. They surprised me so much by their creativity and they are so special and the music is like balsam for the ears.

What music would you have played at your funeral?

At the moment it is one song: God Only Knows (the Bowie version) but this has a personal reason and can change.

What question would you like to be asked that you never are? (And what would be your answer?)

Good question!!! Why I am singing about nudity in the song Nue?

It is an inner nudity I am singing about, when you take off your inner clothes, inner protections … about a moment where you are afraid but you go for it nevertheless, and because you are afraid you feel naked, you take the risk. I want to encourage people (and myself) to take more and more often risks in the name of humanity but I also want to encourage people to react respectfully – everybody is wearing a kind of “social protection” ( = a kind of clothes) and the song is speaking about a situation where you take them off.

What’s next for Wunderland?

To make an album and to find a manager or the other way round. Both work for us 🙂 I am just very impatient…I want it to happen tomorrow!

I would like to thank people who support us, like you do by interviewing us, Olivier Temime, the great jazz saxophonist ,for sharing his enormous talent with us and Patrice for being Patrice.